If you get an error message in your email client software saying Your connection has been blocked temporarily - Try again later or Server access temporarily blocked! Please try again later, or Client IP address (aa.bb.cc.dd) blocked this means the Intrusion Prevention System (IPS) in VPOP3 has detected abnormal behaviour from your IP address, and it has applied a temporary block to prevent abusive behaviour.

There are two components in which detect abnormal activity - the SMTP service and the Login component.

You can set how the SMTP Service IPS works by going to Services → SMTP → IDS/IPS in the VPOP3 settings. 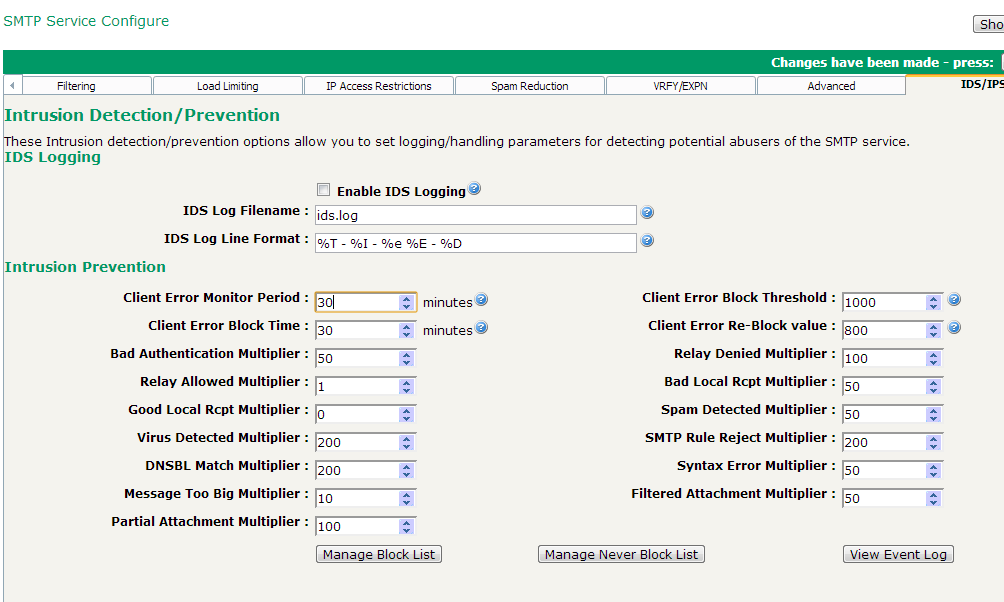 Every time one of the monitored events happens (eg a failed login, or a message containing a blocked attachment name) the relevant 'multiplier' is added to a score for that IP address. If that score reaches theClient Error Block Threshold value within the specified Client Error Monitor Period, then the IP address is blocked for the Client Error Block Time time.

For instance, with the default settings of:

You can access the settings for this by going to Settings → Security Settings → Intrusion Protection. VPOP3 will block IP addresses if it sees repeated attempts to log in with an invalid username and/or password from an IP address. This is separate from the Account Locking facility which just blocks an account, as this will also check for attempts to log in to multiple different accounts, or even accounts which don't actually exist in VPOP3.

You can manage the blocked IP addresses on either the SMTP service or Security Settings pages described above. The options below are identical on those two pages.

You can add/remove addresses from the 'never block list' by clicking on the Manage Never Block Listbutton.

As well as preventing the blocking of individual IP addresses, you can stop a subnet being blocked by using CIDR notation, eg 192.168.1.0/24

The 'Block' list shows which IP addresses have been blocked, either automatically or manually.

As well as manually blocking individual IP addresses, you can block a subnet by using CIDR notation, eg192.168.1.0/24

In the block list, if you double-click on a blocked IP address, then a message will appear summarising why that IP address was blocked.

Common causes of legitimate IP addresses being blocked are:

Normally a user has to perform these actions many times to be blocked, so in most cases legitimate users won't be blocked.

However, sometimes users will repeatedly try an action even though it has failed, without trying to establish why it failed, in the hope that somehow it will work later - this can lead to their IP address being blocked

In version 5.0d and earlier there was a known issue with the Manage Block List and Manage Never Block List buttons in Internet Explorer. Other web browsers, such as Mozilla Firefox and Google Chrome work correctly. This problem was fixed in version 5.0e